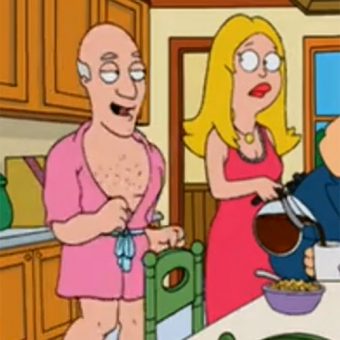 Bullock Brings the Family Together

I am not sure if I should be pissed or not. I mean, I planned on fucking him at some point, but still, it’s the principle of the matter, ya know?

So anyway, a couple of days ago the whole family went to the annual CIA carnival. I did my best to avoid Agent Duper and the Deputy Director, I didn’t need that headache with Stan and the kids here.  Either way, there was little chance of a smooth ride… Usually, Stan causes enough trouble at these things on his own but this time our problems started with Haley.

Her and Deputy Director Bullock had gotten in a stupid argument. Yes.. we get it, the CIA does evil things… just do what I do- smoke something and get over it!

The whole rest of the day Stan would not stop stressing about it. Hell, it was our sex night and all he could do is fret like an old woman! After breaking Christie White I was in serious need of some wang. I couldn’t even take care of myself because he whined about it his sleep!

The next day I had just gotten Steve out of the house when Haley rolled in looking like hell, I thought at the time that she had just been out partying or something after breaking up with Jeff. I looked like that sometimes coming home as a teenager. Either way, I had to wait until she was out cold before I could leave. Luckily she went straight upstairs and passed out.

Stan was always telling me how Bullock was never at work till well after lunch so I hoped I could catch him at home. I hopped in the car and drove over to his house. When I knocked on his door he answered it looking sleepy but oddly happy to see me. He was only wearing a robe so I figured he wasn’t planning on going anywhere.

“Francine! How are you?” He let his robe hang open a little as he waved me inside.

Men, you can always count on them to be inappropriate. Not that it was a bad thing, his cock is very nice and I had planned on doing this for a while now, but still, a little patience would be appreciated.

I stepped inside and had barely set my purse down before he was on me trying to stick his tongue down my throat.

I pushed him off and said, “Wait, I’m just here to make sure Haley didn’t mess up Stan’s promotion.”

“Well in that case,” he said with a sly smile. “You know how to fix things.” and with that he let his robe open up fully.