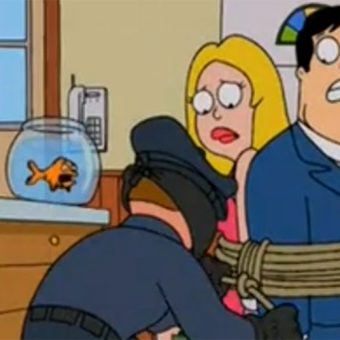 About 9 minutes to read.

Stan and the NGA have been a thing for as long as Stan was old enough to hold a gun. Probably longer than that! Of course, Haley hates it and there has always been static on that subject. But, this week, when Stan tried to pull a trick on her I got the treat!

Or rather I took it.

It all started the day of Stan’s last NGA meeting. Stan and the guys were worshiping their pistols in the living room, and I was supplying the snacks.

Unfortunately not like that. Wouldn’t that be fun? Hehe. I did think about walking out there nude but Stan would probably start shooting everyone!

Anyway, Haley and Roger were in the kitchen. Stan had handcuffed Haley to the oven to force her to help, not to mention keep her out of the living room, and Rodger was picking through the fridge for treats.

I was whipping up some drinks for the guys, daydreaming about prancing out there in my birthday suit, while Haley complained non-stop about the “gun nuts”. I had been listening to her drone on all morning.

Finally, I had had enough, “Look, Haley, I know you hate guns but you can’t stop your dad from being who he is.”

I put down the drinks I was working on and stepped in close to Haley, whispering in her ear, “You need to just deal with it, Haley.” I glanced over the kitchen island to make sure Roger wasn’t watching before slipping a hand down Haley’s pants. “If I can put up with all of your father’s BS without complaint…” I pushed a finger against her clit and started massaging it through the hood, “..then so can you.”

Haley closed her eyes and didn’t say another word about the NGA.

Steve walked into the kitchen but was totally engrossed in a comic book and a cookie of Roger’s he had taken, so I kept going.

I worked my finger back and forth across her hot flesh. She grabbed onto me, clutching me tightly with her free hand, and said, quite louder than normal, “Yes Mommy!”

I pulled my wet finger out of her pants and pointed it at her, “That’s right Haley, now not another word on it.”

I returned to the drinks and dipped my finger into the glass I was prepping for Stan. As I turned to leave the kitchen the look on Haley’s face gave me a tingle, her head tilted down and she was looking up at me biting her lip and smiling.

Unfortunately, things didn’t stay settled down between Stan and Haley for long.

After a few days of light arguments, things went from bad to terrible. Stan and Haley were having a giant blow out because Haley got him tossed out of the NGA. I guess Stan had to convince Haley that guns were good to get back in, and he had a plan for that.

Of course, he forgot to let me in on it!