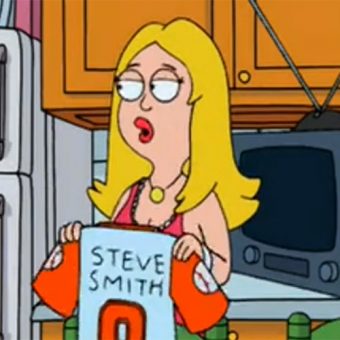 Oh what an amazing day! Stan wanted some bonding time with Steve, which is always a rare treat. So when Stan had trouble getting a special surprise setup for a baseball trip to see the Yankees play the Orioles I knew I had to do something to help!

Stan had tried and tried using his CIA connections to get him and the boys behind-the-scenes access to the locker room. But they wouldn’t budge. So as soon as Stan left for work I took matters into my own hands. I hit redial on the phone and was immediately connected to Joe Torre’s direct line.

Mr. Torre, it turns out, is the manager for the Yankees. He was initially reluctant but I sweet-talked him into letting me come down for an in-person bit of negotiation on behalf of Stan. There was enough innuendo to ensure that he knew that I would do anything to get Stan and the boys’ access.

If all it took was letting some rich guy bang me to bring Stan and Steve closer together then I was all for it!

Little did I know…

The Yankees were playing in Baltimore so I quickly spruced up my makeup, ditched my bra, and hopped in the car. The stadium is only an hour away so I made it there before eight am.

When I got to the gate I told the guard that I was here to see Mr. Torre. He gave me a long, slow look up and down.

I felt like giving him a little twirl… so that’s what I did. He smiled and nodded at me approvingly and grabbed his radio, “The Special Guest is here, she’s good to go.”

Another guard showed up a few moments later and he walked me through the off-limits areas of the Stadium. I thought for sure we would be going up to the offices or that I’d actually get to see the skybox or something but I soon found myself at the locker room doors.

The guard just tipped his hat at me and said, “Have fun little lady.” then he turned and left me there.

I adjusted my bosom and walked through the doors. My jaw nearly hit the floor, Joe Torre wasn’t who was waiting for me.