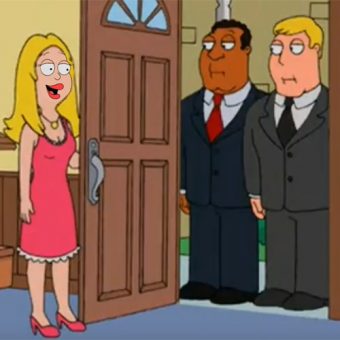 About 8 minutes to read.

Ugg! It turns out Stan has been lying to the whole family for over twenty years about his father, who it turns out is actually some kind of jewel thief! I really should have let the FBI take Stan away after lying like that but I’ll be damned if I have to get a job to support the kids.

Anyway, I’m getting ahead of myself. What happened was right after who we thought was Stan’s dad had passed away, his real dad Jack showed up at the funeral. He ended up staying with us for a few days while he tried to recruit Stan into the Scarlet Alliance. Which I guess is some kind of private CIA-like organization that he abandoned Stan for decades ago!

…at least that’s what he convinced Stan he was doing.

I was just annoyed at the whole thing… that is until two men from the FBI came knocking, then I panicked.

They were both handsome, one was white and stern-faced, the other black with a chiseled jaw. They were very tall too. At least six-six and very well built. You know, the kind of guys that spent all their downtime at the gym.

They started asking about someone who sounded just like Jack who was wanted in a string of jewel heists. I never expected that Jack was a criminal so could you blame me for babbling like an idiot? As soon as I realized that I had unwittingly told them that their description fit my new father-in-law I tried to play dumb-er, saying that he doesn’t have a mustache.

I even tried to distract them with some cleavage!

At first, they seemed convinced so I thought I had dodged a bullet but right as they looked as if they were turning to leave they turned back around and started pelting me with all sorts of questions. They didn’t seem to be entirely convinced by my answers either.

Jack and Stan were just out in the backyard! I didn’t care if Jack went to prison but the FBI would take Stan too and I couldn’t risk that. So, when they demanded to be allowed to search the house I agreed and led them directly upstairs. I made sure to walk ahead of them enough so that they could get a good look at my ass and, if they were paying any attention, a peek up my skirt.

I took them into the bedroom first since the window in there faced the street and not the backyard so they wouldn’t see Jack and it would be hard for Stan to hear anything. I quickly motioned to Klaus to be quiet just as the two men pushed their way into the room.

As they searched around the room I quietly closed the door and leaned against it with my hands behind my back, which always helps me draw focus to my chest. “So… my husband is in the CIA. He really wouldn’t be hiding something like this you know.”

The guys stopped what they were doing and the White agent looked at me with a smile, “We know Mrs. Smith, we just wanted to see if you would bring us up here.”

As he spoke they walked over to stand on either side of me.