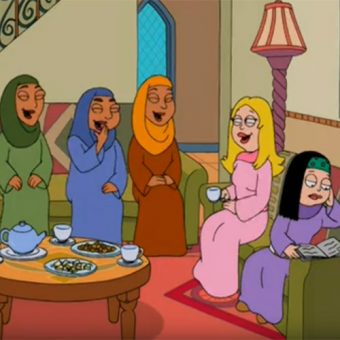 About 14 minutes to read.

I know, I know… It’s been a while since I wrote, but I left you home in America while the whole family had to move to Saudi Arabia! There is so much to tell I don’t think I can fit it all in one entry!

Before I get to our unexpected trip, my fun actually started the night of my big play. I guess if I hadn’t done the play we wouldn’t have had to go but… oh well!

I was playing the teapot in Beauty and the Beast, not that Stan remembered anything about it. On the opening night, Stan had volunteered to host some party for Deputy Director Bullock. He actually told me to drop the play and go with him but I was like, “Marriage is an equal partnership.” I have my own life and he will just have to deal with that!

I really hate it when Stan tries to control my life!

The play had gone wonderfully, everyone loved us! The Bookcase, played by a cute redheaded gal named Amanda, and I decided to skip the afterparty and instead we lounged around the dressing room which was just on the top floor of the playhouse.

My teapot costume wasn’t really made for quick removal and even with Amanda’s help I couldn’t get the heavy thing off so I kept it on while we waited for her husband to arrive to give us a hand.

Turns out Amanda was only wearing a thin little slip under her costume, which was more than I had on but I didn’t tell her that. She shyly asked me if it was ok that she cooled off in just her slip for a bit. It was so cute!

I told her that it was fine and that she looked really, really good. Which she really did! We had been flirting off and on for a few weeks, ever since we met actually, so I was very happy for a chance to be alone with her. Especially while she was already partially undressed.

Anyway, we chatted for a while about her work as a music teacher and I complained about Stan and the kids. Boring housewife type shit.

Then she dropped a bombshell on me. It turned out that she and her husband had discussed swinging before but haven’t had much luck with it yet. They had found several guys for her to enjoy but no girls for either of them.

Wow, if I asked Stan to bring guys in for me to play with he would lose his mind!

“I’d love to!” I blurted out without thinking. “I mean if you’d like.”