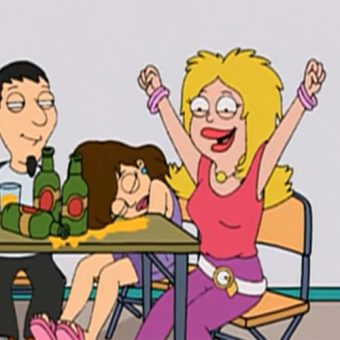 On my way back to the apartment I decided that a party was in order, because to my younger self it was always time for a party. I told Haley that she owed me one after dropping me off like that since it wasn’t far enough out of town to get any good hitchhiking action. She was pretty shocked when I said that, I bet she knows how to play that game too.

I know that Haley had invited a bunch of people and there was a LOT of booze.

I remember at one point I was drinking with these two guys at our kitchen table and Haley was talking to some cute stoner guy, Jeff, of course, I just thought it was a new guy to hit on at some point. Maybe share with my new roomie?

I think I.. yea, I took those guys to the bedroom and I am pretty sure they were in the middle of spit roasting me when Jeff walked in on us. I really wish I could remember it more, I haven’t had a good double fuck in a loooong time… Oh well, if it was any good I’d remember more of it. They probably were either really small or had whiskey dick or something because I was super jazzed that the cute stoner guy came in.

I think I jumped off those guys and I’m sure I invited Jeff to join us. I remember grabbing him and trying to pull him to the bed but instead, he just dragged me away from my guys back to the party.

Somehow I ended up on the table in the kitchen, still nude though I don’t think I minded, I wanna say I was letting everyone do body shots off of me. Jeff seemed freaked out by the whole thing but he told me he would take me to some big concert if I got dressed.

I think I left a note for Haley about it…

I don’t recall how we got there or really many details of that night. I know that I ditched Jeff right away because he wouldn’t let me blow him in the car ride there or do anything with me once we arrived. I might have called him a fag… It was still the eighties for me!

That’s why I am so mad! I mean, yea I remember taking a shot from the trucker. Which is always yummy and that made for my fifth load since starting this hehehehe. And I think I will remember Haley’s skills for a long, long time.

Honestly, there nothing wrong with it, is there? Maybe if she ever came to me so it was her idea…

Anyway, I want to remember all of my new adventures because this time I plan to be mostly sober, I want to savor it!!!! I might have planted a rose bush for every guy I slept with but that doesn’t mean I remember most of them!