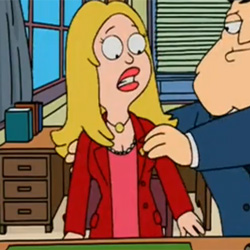 Karl shoved me into a chair and walked around his desk. He was still yelling, phone in his hand, starting to dial a number when he just suddenly stopped and stared at me. I looked down slowly… I was so terrified on my way in that I hadn’t even noticed that in the small struggle into his office my dress had ridden up past my hips when I hit the chair.

And of course, I hadn’t worn panties since Mr. Swat.

But boy, Karl sure noticed!

I looked down at my blonde bush and slowly raised my eyes up to see that Karl had set the phone down, still staring at my crotch. I looked around and saw that there were no pictures of a wife or a girlfriend in his office so I took my opportunity and slowly spread my legs for him.

He sat down in his oversized office chair and mumbled something I didn’t quite understand but he wasn’t yelling anymore so I was out of immediate danger.

Well… I decided if I was in for a penny…

I slowly stood up, pulling my dress up past my navel so he could still get a great look at my pretty little bush. I told him that my name was Francine and I really wanted to learn about real estate. He slowly nodded his head so I quickly shimmied out of my dress and let it fall to the floor, luckily I was wearing a cute bra!

He just sat there, continuing to nod to show he kind of understood what I was saying.

I sauntered around his desk until I was standing right in front of him, which forced him to look up at me just as I leaned in, popped the clasp on my bra, and let my girls burst out right into his face.

I was so nervous. Sure, Mr. Swat took his opportunity in the heat of the moment but he couldn’t really see me under my dress. This was the first time I had stood nude in front of another man in two decades, and a girl gets self-conscious.

Boy was I worried about nothing!

My boobs hadn’t been out of my bra more than two seconds before he grabbed them with both hands and plowing his face right into them. His hands were so strong and explorative! And his mouth… the way he sucked on my nipples nearly dropped me to the floor!