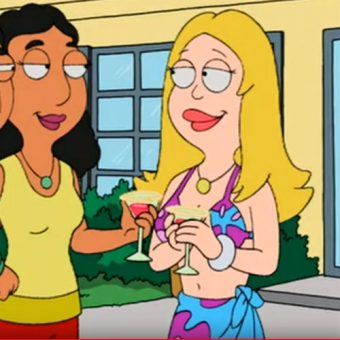 About 16 minutes to read.

So I was trying to make a list of potential partners after my Duper adventure and I realized that I just really don’t have many friends anymore, which means that my opportunities for fun are kinda limited. Other than Mr. Tuttle, who Stan hates cause he talks and talks and talks, we just don’t spend time with any of the neighbors because Stan’s CIA clearance and background checks make everyone nervous!

Hell, I didn’t even know Mr. Tuttle’s wife had died six months ago until he ran into us on the way home a few days ago. I am so out of touch!

After hearing about his poor wife I felt bad that he was alone. He seemed so sad still, so I figured that I would go over to try to cheer him up and maybe get some information about the rest of the neighbors so I could try to put together some kind of social life again.

I threw together a few sandwiches and tossed a couple of long-necked beers in a basket and walked over to his house. I had never been there before, even though it was just a few doors down. Seems like all I did was cook and clean the house for twenty years… sad.

When I got to his place I decided to take a peek in his windows before knocking on the door.

From what I could see through the first few windows was his house was not very well kept, seemed his wife did most of the cleaning and without her, he didn’t even bother to repair anything that might have fallen down or torn. My heart broke a little, that poor man! When I got to the living room window he didn’t have his curtains drawn at all so I could clearly see him sitting in his living room watching something on the TV.

He was nude and touching himself!

I decided I still could do something nice for him.

I went up to his door and gave the handle a little test. As I thought it was unlocked. I quietly pushed open the door and crept into his living room. He was softly moaning so it was easy to not be heard. I noticed that the same few videos looped around the screen, the poor guy didn’t even have much to look at, but it was all me baby. I set the basket down while I pulled off my dress and undid my bra so that I was totally nude except for my little pink heels and my gold locket necklace.