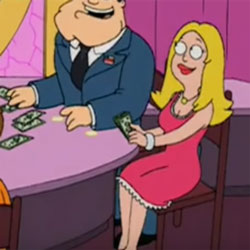 I nodded my head enthusiastically and grabbing my arm she yanked me into the room with her. She leaned in and whispered into my ear, “Don’t be nervous. And remember, don’t let them touch you.” Without waiting for my reply she unzipped my dress let it drop to the floor.

What the guys said melted my heart… and made me sopping wet. “Oh my god, she doesn’t wear panties! That’s so hot! I’d give anything to eat that pussy!”

Remember, the other girl was completely nude and they were yelling this at ME! I just giggled at them like a stupid schoolgirl. I was a little lost, I was already just about nude, so I had no idea what was I supposed to do next…

I still had my bra on so I started with that. My boobs are full D cups but not nearly as perky as this young stripper’s bouncy breasts. I had barely had it unclasped when the girl piped up, “That’s a great idea guys! I love eating pussy. You boys wanna watch us eat each other out?”

Now, I have eaten my share of pussy in my time, but it has been more years than this chick had been alive since I had any.

Anyway, the girl grabbed some large pillows that were piled in the corner and threw them on the floor in front of the guys’ chairs and they pulled up close to surround the new ‘stage’.

She reminded them very firmly that they cannot touch us.

Three college studs would have been fun. Awwww, oh well.

They looked so eager to watch the show, they were rubbing their hands together with excitement and sitting on the very edge of their chairs. I bet this was their very first time seeing two women together. I loved the idea that I was about to give these boys something they will spank to for years to come. So I jumped in with enthusiasm!

The small girl had lowered herself onto the pillows and without waiting for her to ask or even beckon me to join her I slinked on top of her, spreading my legs over her face and pulling her legs apart. For a moment I wasn’t sure if she was faking it for the show or what but it turned out she definitely was eager! I hadn’t even lowered myself fully onto her face before I felt her lift her head up and start enthusiastically licking my pussy.

It hadn’t even been an hour since the clown had been eating my box and now this hot girl was back up in there! She was wonderful, if not a little inexperienced. The extreme softness of her skin and lips felt beyond amazing as a contrast to the rough-faced stranger I enjoyed earlier today. I quivered a little in pleasure and dove right in on her.

As I said, I have eaten a good bit of pussy in my life, I don’t know if it was because it had been so long or that this girl took really good care of herself but she was absolutely DELICIOUS! Her pussy was completely bald, Stan made me just trim mine down into a semi-neat triangular bush. Her kitty was incredibly soft and her whole body reacted to my every nibble, every flick of my tongue.

It was only a few minutes before I felt her body tense up and her muffled moans erupted from between my legs. The sweet gush of juice told me she wasn’t faking.

Yup, I still had it. Suck dick like a champ. CHECK. Eat pussy like a queen, CHECK.

I eagerly lapped up every drop she gave me and decided to grind into her and really ride her. I sat up and pushed myself down onto her face pushing my clit into her chin as her tongue pushed deep inside of me.

It felt sooooo good, every time she would move her jaw just a bit to reach somewhere new with her tongue her chin would push hard in a new direction against my clit. I had my eyes closed, my hips were thrusting of their own accord and I was moaning quite loudly!