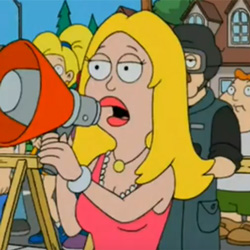 A few days after that Steve had his heart crushed by that cheerleader and he went a little nuts at school, barricading himself inside like some mini-terrorist. So Stan and I went to talk him down before the swat team shot him.

I hadn’t worn panties in three days and was hoping someone would at least notice… and boy did they!

When we arrived there was a crowd of people being held back by police and a few SWAT members had their guns drawn. Stan planned on going inside while I was left to talk Steve down.  When he shoved the megaphone at me Stan had punched my arm a little harder than he needed to and he ended up knocking me down to the ground.

It didn’t hurt, but I ended up on my ass with my legs in the air flashing my vag right into the crowd. Most everyone was too busy staring at the school to notice… that is except this stern-looking swat guy who was standing behind us and Steve’s fat friend Barry who was behind him. Even Stan didn’t notice my exposed bush, let alone the men staring, but I sure did!

Like a bolt of lightning, I was suddenly wetter than I had been in ages!

I took a little extra time getting up and pulling my dress back into place allowing them to enjoy the show while Stan ran off to talk to Steve in person, leaving me to try to talk him down with the megaphone.

I was really hoping that Stan would have noticed. Oh well.

Stan had barely disappeared into the school when I discovered just how big of an impression I had made on my small audience.

I had just uttered my first words into the megaphone when I felt Mr. Swat sliding his hand under my dress from behind!

I focused on my task so I wouldn’t attract any attention and just started babbling into the speaker, inching backward so my ass was practically right against the tall, mustached stranger.

I started rambling out the first story I could think of, about the married man I used to fantasize about fucking when I was Steve’s age.

I felt the strong unfamiliar hands of Mr. Swat reach right up my dress and grab my ass firmly without the slightest bit of hesitation. My voice jumped a little but I kept on rambling out my story, I’m not even sure if it was making any sense. At the moment, I didn’t really care.

His fingers slid across my dripping pussy just as Stan screamed out for me to stop. I was so startled, I thought he was yelling because he had caught me!!! I must have jumped a little because suddenly Mr. Swat had a pair of fingers buried inside of me!!!

I just stood there, staring forward at the school, praying that Stan wouldn’t poke his head out and see… secretly hoping that a least a few people behind me were watching. He popped another finger inside of me and I blurted out more of my story and Stan scolded me again.

I took that moment to peek back at Mr. Swat who was playing it cool as a cucumber. You’d never know by the look on his face that he was furiously finger fucking me with his free hand.

Sadly, no one else seemed to notice either, no one except Barry who had his hand down his pants and was obviously beating his noticeably gigantic meat while watching the show.

I turned back to make sure Stan was still inside and debated if I had enough time… All I wanted at that moment was to bend over all the way and let Mr. Swat fuck my brains out right then and there, I didn’t care who saw!

I ran up to my boys and threw my arms around them, hoping they wouldn’t notice the slick line running down my legs…